India’s 71-Year Test: The Journey to Triumph in Australia

India’s 71-Year Test presents the story of the Indian Men’s Cricket Team in what is considered one of its greatest recurring challenges – taking on Australia in Test cricket, Down Under.

Though perceived as a ‘modern’ rivalry, particularly compared to the Ashes, India’s quest for victory on Aussie soil dates back to 1947, the year the country gained independence. The journey has since spanned generations of superstar players and world-beating teams, and the two nations now highly prize the Border–Gavaskar Trophy.

This publication charts how, on the shoulders of these ‘giants’, a confident and talented Indian touring side of 2018/19 was finally able to reach the summit. India’s 71-Year Test is a highly pictorial and easy-to-digest collection of short stories, key statistics and over 200 images from the first 12 tours to Australia – many of which were brought to light thanks to the Bradman Museum’s Holman Collection of historical press photographs.

Ravi Shastri, who has the unique perspective of touring Australia both as a player and as coach of the successful side, has provided a comprehensive foreword based on his rare insights. 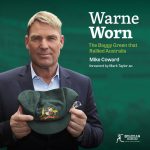